I hate April too.

BUT, it is officially spring break for me! I leave at 1PM to make the 8 hour drive home to Ohio to get the horse trailer from my mom.

I feel like a GIANT weight has been off my shoulder. However, there is a little scratch inside me reminding me I DO have 3 projects due the day I get back (Thanks a heap profs. Its not like I want to relax on spring break or anything.) and I need to study Spanish since on my last exam I literally failed it. Try and guess how badly. I will give you a hint, it was below a 30%. Yeah I am f******. But I will not go into that, I have a tutor now and I have have 8 weeks left to make it up.

I am anxiously awaiting my new saddle! I had to buy leathers separately too and they might make it here before the saddle itself. EEEEEEEEEEEEEEEE! So excited!

Forgot to tell you why I hate March in Missouri.

It was 30 degrees 2 weeks ago and snowed 6 inches. Then it was nice for approx 6 days, temps in the 70's and one day it even hit 84. Yesterday it was 45. This morning in slneeted (snow/sleet) like 3 inches. UGHGGGHHH!

I woke up early to ride my conditioning sets before class this morning but my efforts were thrawrted by mother nature. Dammit! I didn't want to ride ANOTHER flat session since he has had 3 this week and I didnt want to have to borrow Cheryl's saddle again.

Good news is R will lunge him while I am gone for 4 days.

I almost quit my job yesterday. My GM quit, a manger got fired and I got my promotion taken back. A lot of other shit went down as well that I do not feel comfortable sharing but I will say it involved beer and other things. Yeah this girl was livid. I would have told them all to suck it if I didn't have a horse and 3 pets to feed.

We still don't know what happened to Scarlett.

To jump around again from happy to sad to happy I wanted to send a shout out to my friend Matthew B. for keeping my spirits up about my horse :) I have my doubts sometimes and he makes me feel like I am headed in the right direction. You guys all do actually. I LOVE horse people!

15 days till Equine Affaire...I wonder if I can lose 6 lbs by then so I can fit into my tall boots and not look like a fat ass in front of hundreds of people.
Posted by Checkmark115 at 11:31 AM 3 comments:
Email ThisBlogThis!Share to TwitterShare to FacebookShare to Pinterest 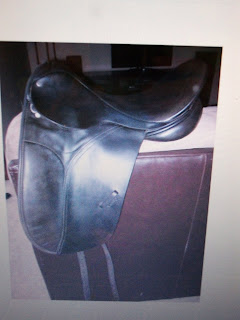 After much discussion with the boyfriend and mother, it was decided to snath this gorgeous thing off ebay while I could. I know this was quick...since I just decided 2 days ago it was definitely a saddle issue.

Today I tested my theory more. I rode in Cheryls County dressage saddle and then switched to mine halfway through. The difference was unbelievable.

Perfect pony in the County,

Devilish bucking stiff nightmare in mine.

Well that solved it for me didn't it.

I called my mom up right away afterwards and explained my predicament. I am poor. I want to show this year. I cannot show if I don't have a saddle that fits. I can't show if I spend a ton of $$ on a new saddle. Hmmm. Conundrum.

I am now selling my Wintec Isabell Pro on Ebay as well. I hope to make up the difference since I still choked a little spending $525 since I just sent in my USEA fees, paid Yankee's spring vet bills and just sent a $200 check for a dressage show and I need to do some jumper shows OH and I paid $70 to ride in Equine Affaire AND I am going to get my trailer in Ohio this weekend and gas for an 8 hr. drive both ways....gah. Anyways, its bought, and my Wintec will be listed here shortly.

I hope this will help :) 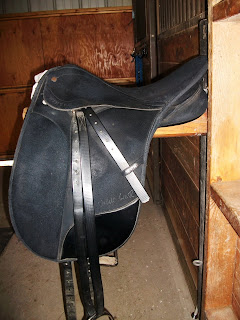 So remember how I said Scarlett miscarried her foal? Well....she died today. It was SUPER shocking and all of us at the barn are stunned. R was working the PM shift and she said Scarlett was munching hay fine, then FLIPPED out, ran through a fence, then died. Just like that. No blood, just died. Such a sad day when TWO beautiful creatures die horrid deaths :(
Posted by Checkmark115 at 5:47 PM 8 comments:
Email ThisBlogThis!Share to TwitterShare to FacebookShare to Pinterest

s
I am almost done. 66 math HW problems stand between me and 11 days of glorious spring break. I took an early leave day though and rode my horse, cleaned ALL my tack and org. the tack room. Gaze upon its beauty. (All mt stuff is cramped in a little corner, but damn I made that corner clean!) I know you love my pink rain boots. I know you do. It was WONDERFUL to know I had NOTHING to rush off and do...I took a whole 3 hours at the barn today. 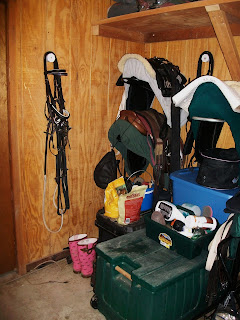 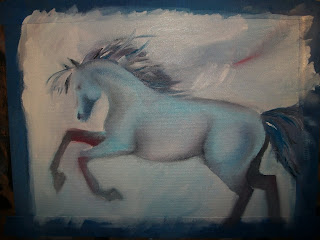 Looky at what I maaaaade. Its a prancing pony. I was bored painting a stupid sphere so I painted this. I think I will make it better. Painting is really hard. 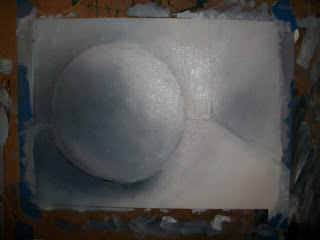 Excuse my simple writing style today. My brain is taking a vacation.

I rode my ponyface and he was ahmahzazing. For the most part.

I asked Cheryl if I could borrow her Passier saddle to try out and he.was.a.dream. This leads me to believe that it is a saddle issue mixed with ulcers...He is still touchy on his sides

Like I said before he was mostly good. I REALLY wanted to ride in the outdoor but our neighbors (haha neigh is in neighbor) stupid cow herd was lurking in the scary shadows and scared Pronto and Yankee shitless. He was actually rearing straight in the air trying to escape them. I felt bad for him since he could hear them and smell them but couldnt see them. Not mad at all actually. We had to migrate to the indoor which I guess was all for the better since it started to rain.

Anyways after that he was fine. PERFECT. Glorious. Stunning. Like, OMG.

Perfect to the left. Stretchy, no bucking, soft in my hands, perfect transitions, shoulder-in/fores. Not once did he lock up. Ok wait yeah he did, I lied. Asking him to sidepass at the trot he would throw his nosey a little but I think thats because I have overschooled them, since he was fine with other lateral work.

So....New saddle. F***. I am poor. I cannot afford a new saddle. I am diligently searching ebay and I found a reallllly nice County saddle for cheap (relatively). Tomorrow I will ride in Cheryls County to see if that one works just as nicely.

So in other (sad) news. Scarlett miscarried her foal yesterday; she only has 2 more months to go. I was really torn up about it, she was too. When the vet removed it from the stall, she just stared at it. She is really depressed too, now. The vet could not figure out anything that could have caused a miscarriage. Fetus looks fine, Scarlett was fine, updated on all vaccines, and the membrane was fine. I thought about the fluxuation in weather...but I doubt that was the cause. Although it was 29 and snowed last week and yesterday it was 82 degrees.... It is heartbreaking. Scarlett is such a sweet girl and I would kiss her belly everytime I fed...ugh I am still sad. She was the only horse bred last season so now the Holekamps have no babies this year from Windfall. 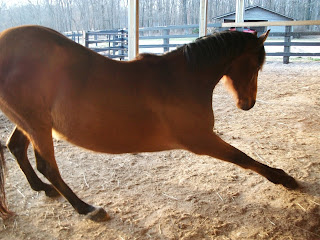 Hate to leave it on a sad note, but I have no others news.
Posted by Checkmark115 at 8:00 PM 1 comment:
Email ThisBlogThis!Share to TwitterShare to FacebookShare to Pinterest 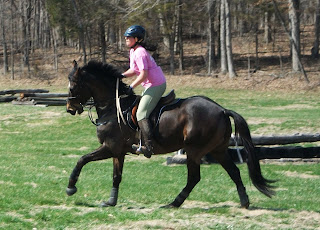 Look at me I look skinny! HA! I was giving a pretty big half halt too....

It was pretty HOT and muddy yesterday...sigh. I hate summer heat with a passion. 83 degrees before april is too much. Yankee agreeds. He still has his winter coat! Overall I only worked him about 25 min total, including walking down to the XC field. I only schooled baby fences and tried to work combos to keep him on the ball and not rushing.

He was crazy hyper.

He is always soooper excited to jump and I have a hard time controlling him sometimes. He never runs away, just gets really strong before fences. I am afraid he will jump hollow if he runs at them so yesterday we worked on being a calm pony. More often than not though he took off early and left me behind. UGH. 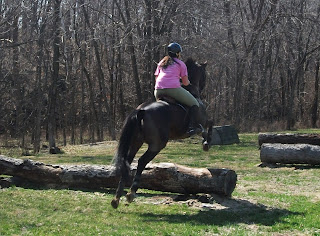 I tested the waters in holding him a bit more over fences and it seemed to work a bit with combo jumps, but free standing single fences not so much. My plan of attack from now in is
*HOLD him collected on combo jumps...2 strides bounces, coffins etc. Keep him in front of leg but DO NOT let him run at them. He loses carefullness and I KNOW he can jump 3ft from a walk if he has to
*Half halt strong 3-4 strides out on free standing jumps and let him jump them at his own pace then IMMEDIATLY bring him back. 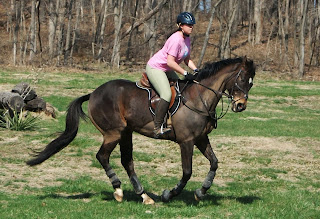 This works for XC but stadium is so tight that we still will need a new battle plan for that..

I guess its better that he LIKES to jump rather than not jump...but getting in a fix about jumping and lathering up in 20 min its so not the calm we need. Gosh I thought we were over this last year Yanks. 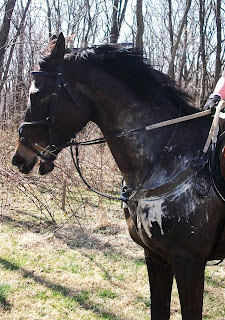 "Look at me, I'm a retarded ponyface who gets sooper worked up about little baby rails on the ground...I don't know why...I just wanna go fast and Mom doesn't let me. She wants me to behave and I hates its."

So on the 'what is wrong with my horse front'..I think I am going to go with Ulcers. He is very touchy on his sides and hates being girthed lately....Like I said he is back on Ulcerguard though and I am TRYING to get him ample turnout. The field is soo muddy though and he gets infected heels so easily. Trying to balance it is hard!

ALSO, Training level it is!

Thanks to all who voted! I appreciate your support :D