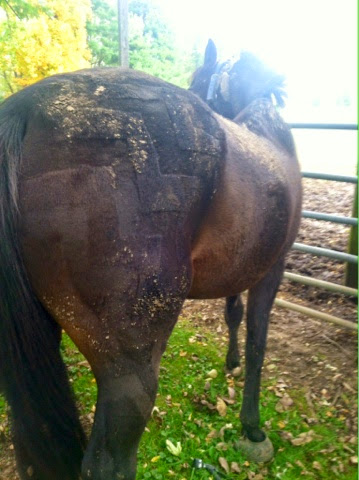 I can't even.
This is better than yesterday because they got rained on all day.
But dear god come next week they are getting bathed, shaved and ridden.
Posted by Checkmark115 at 11:12 PM 3 comments:
Email ThisBlogThis!Share to TwitterShare to FacebookShare to Pinterest

Quick! I need more secrets and knowledge from the blogging world!
I've been madly trying to find hay in my area and repeatedly coming up blank. Either the provider is out or they don't deliver.
I'm down to four square bales for 3 horses. Meaning I need hay THIS WEEKEND.
* HALP PANICKING Y DIS ALWAYS HAPPEN.*
For one, I won't be here  this weekend (YAY EVENTING) so I have to wrangle a trusty friend to assist.
For two, need delivered.
For three, can't break the bank. I work, but apparently not near enough.
There's square bale options but their cost is almost double what I found elsewhere.
Elsewhere being giant ass hay bales.
I didn't even know giant ass square bales existed, but this guy wants it gone. Selling 1000lb, 3x3x6 bales. There are flakes, approx 3x3 ft and 4 inches thick. For $55 ea. Delivers.
I tried imaging the size in comparison to reg small sq bales. Not working out.
I tried doing the math. I don't math well, but by my calculations it can make this last. A while. If I buy two.
Questions.
CAN you feed this to horses?? How? How do you break the flakes up even smaller? Have ANY of you fed giant ass square bales? How long do they last? How do you store it? What ARE these magical creatures??
Please help. Need to make a decision by tomorrow am.
At some point I will be buying round bales, but that will hae to wait for next paycheck.
Just trying to decide if I should fet 50 square at $200 or two big ass bales for 110 and it last allllmost the same amount of time. Almost.
Help help help help help
Posted by Checkmark115 at 5:09 PM 12 comments:
Email ThisBlogThis!Share to TwitterShare to FacebookShare to Pinterest

What Do Wednesday: Tragic Weather Conditions

(Thank you all for the encouragement for this weekend! OF COURSE  I  The Boy will take pics!)

No one informed mother nature that this is not the fucking monsoon season. At least in America.

I am not exaggerating when I say it has rained for a week STRAIGHT. Sideways rain. Big ole fat rain. Drizzle rain. All the rains has been raining down on us for a week and I am miserable. Not to mention,  the week before this, there has been some sort of precipitation gracing my poor pastures. Basically two weeks of torturous moisture.

I do not think I have ever encountered more slop and wetness in my entire existence. I seriously cannot remember a time when this much moisture fell from the sky at such a steady rate for such an extended period of time.

Unless you count frozen moisture. AKA Snowpacalypse 2010 & 2013. Thaaaaat was an adventure of epic proportions.

We will revisit that snow fuckery momentarily.

I think my horses are officially feral because not only have I not ridden in 3 weeks, but they are covered (literally encrusted) in gooey mud that refuses to dry. Dreadlocked tails, filthy manes & soggy and disgusting coats. Bacardi actually flinched away from from me today and gave me the whites of his eyes like a wild stallion. I cannot cope.

I attempted to spare them from the 5 inch mud that is now their field by keeping them in jail their stalls. Their nice, dry, fluffy stalls.

They were having none of that shit.

After 4 days they were basically climbing the walls and threatening to murder me.

I tried explaining to them that they needed to keep their toesies dry because they both have contracted mild cases of thrush (thanks to last weeks mud/moisture) at the moment, as well as front shoes, and dammit, I need them to stay intact. They did not understand. Because they are horsebeasts and would prefer to frolic in the mud and not give a damn about their precious feet.

Of course I felt BAD about keeping them locked up, but I tried weighing the options and it seemed like a good idea.

Keep feet dry and treated for thrush with medicine, without the need for diaper boots and constant worrying. Keep horses clean and dry thus reducing the risk for nasty funguses and getting chilled with the cold temps. Keep them out of mud, thus reducing risk of shoe sucking turmoil. And since they're mildly mentally challenged, they've taken to frequently galloping around like insane wildebeest. Completely forgetting how slippery mud is and how easily they can pull a muscle or tendon OR SLIP AND FALL AND DIE.

This coming from a girl who has harped and lectured about how horses NEED turnout and how, unless at risk their immediate health, they should go out for a few hours at LEAST.

I mean, immediate health. Not the pussy footing owners who spew garbage like, "oh-Sparky-cant-go-out-ever-because-he-might-get-a-scratch-on-his-wittle-face-and-oh-my-fuck-god-forbid-if-he-TROTS-around-the-field".

I could go on for hours about turnout. But thats for another post. This, dear readers, specifically is in regards to turnout during terrible, no good, rather awful and foreboding weather conditions.

As I understand, Ohio is not hte only state getting pounded by mother nature and her cruel sense of humor. And with winter coming 'round, its only about to get worse.

So what I am dying to know is what ya'll do during said conditions? Turnout? Keep in? What are the conditions for said choices?

I tried to reason my choices for this particular instance, but gave up after 4 days. I felt their sanity was worth more than a slight convenience to me in cleanliness and ease of treating thrush. As a result, I've gone through more diapers and duct tape than I care to share, but they are remaining under the thrush treatment. Who knows if it will be effective with the level of muddiness outside. The way I see it though, with the volume of rain we've gotten, it won't dry out for at least a week, probably more. That constitutes of MORE than 2 weeks jailed inside...with no riding. Because I don't have an arena. Just an equally muddy field. reason enough for me. I do NOT want to deal with TWO very pissed off Thoroughbreds for a few weeks on end.

During snowpacalypse it equally as miserable. In 2010 I couldn't even make it out to my barn for more than a week.  So I fully entrusted the care of my horse to the live in caretaker. He at least made sure they were fed...at some point. And maybe did their stalls. Yeah.

In 2013 when it was a lovely mix of 2 days of ice-snow-ice-snow-ice, creating incredible death traps in the fields, that didn't melt for 9 days, we kept them in that WHOLE FUCKING TIME. Not my choice but hte BO demanded it for insurance purposes. We did T/O in the mini paddocks (pictured above in post) for an hour a day, but my poor horse went insane. Clinically. Luckily there we had an indoor so he at least got ridden everyday because I was able to power through the snuckery (snow fuckery) with my SUV. That helped.

A whole 'nother issue becomes stall cleanliness and the absurd amounts of bedding used...but thats for another post.

So please, readers, feed me your secrets.

Posted by Checkmark115 at 7:56 PM 11 comments:
Email ThisBlogThis!Share to TwitterShare to FacebookShare to Pinterest

Specifically, Never Have I Ever. The rules are simple and everyone should know it. Do you have your adult beverage of choice? Sweet, lets do it.

Never have I ever been gotten fake nails.

Never have I ever shown above training level at a sanctioned event.

Never have I ever owned a warmblood.

Never have I ever been to AEC's.

Never have I ever bought a horse for more than $1000

Are some of you feeling tipsy yet?

Never have I ever smelled anything in my life.

Never have I ever seen a Marilyn Monroe movie.

Never have I ever catch rode at a USEA event

Wait. that last one was a lie.

The universe DOES care. It does!

Just as I was truly getting in a funk about the lameness issues (now solved, but prevented riding for a few weeks) and prolonged time off from being sick, insane schedule change, and now the torrential rains, a fellow blogger messages me asking if I would be crazy enough to ride a horse I've never even seen in real life at a sanctioned USEA event THIS WEEKEND.

I thought about it for approximately 18 minutes and then was like, yes. Hell yes. HAIL FUCKING YES.

Completely disregard that I don't have half my showing clothes anymore (stolen) or that I haven't even shown sanctioned in TWO YEARS (omg *dies a little*), or that I'm ever so slightly out of riding shape. Its fiiiiine. It'll be fine. An adventure, if you will.

The details are still in the works, but as of now, right now, on this 13th day of October, I, Monica, will be making my debut back onto to scene of real eventing, riding a horse I've never met.

Some of you may know him as Steady. I know him as Mr. Shiny and fellow OTTB poster child. And now my mount for the freaking Team Challenge! 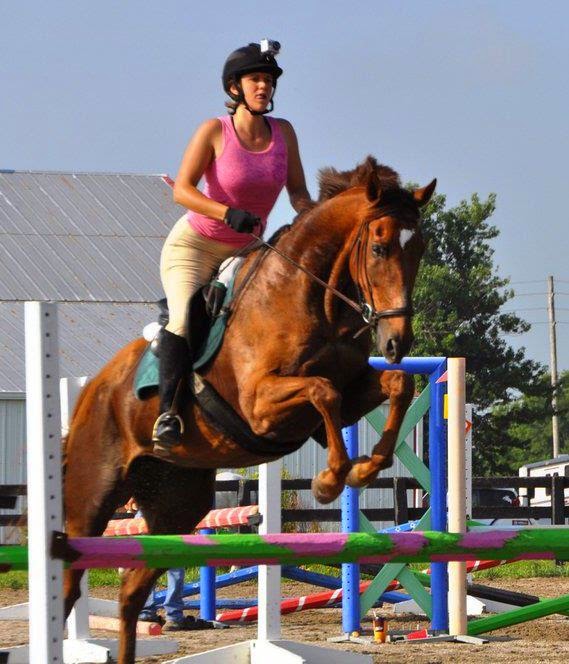 My love for this particular show began way back when Yanks and I competed on a Novice team while going training. It was hella funsies and to this day, one of my favorite memories. If I recall correctly, my team placed third, which was HUGE for me and my baby self with my baby OTTB.

So of course, the eventer inside me is quivering with anticipation and the added excitement of the unknown. Too bad its the last show of the year, but I DONT CARE I'M GOING TO A USEA SHOW IN 2014. 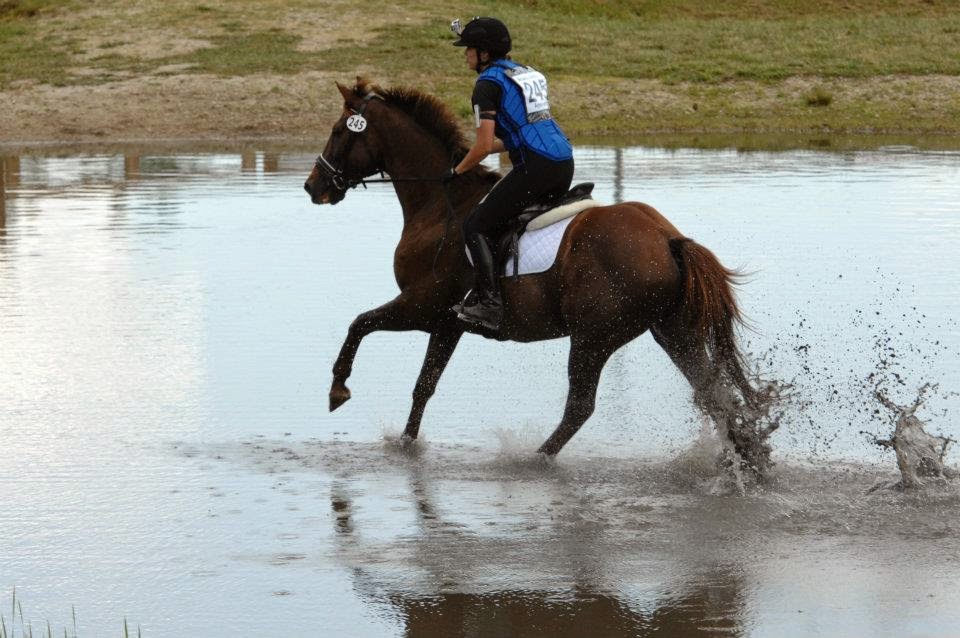 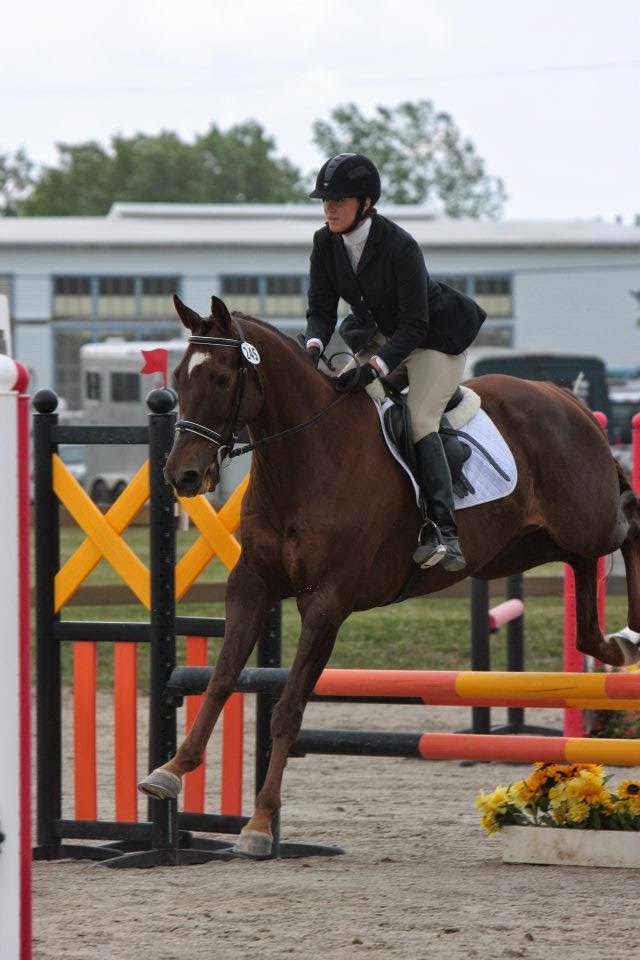 Besides, he so stinking cute and ready for action. I love it! His owner says he's a bit strong and words like "over exuberant" "insanely fast" and "easily pissed off" were thrown around, but that only adds to my fun. Has anyone actually SEEN Yankee go XC? Does anyone know why I use the waterford combo with a leverage action noseband? Yeah. More words could be thrown around for Yankee, like, "Mildly retarded" "Might actually be bipolar" and "nearly uncontrollable".