Oh Lawdy, Today Was Not A Good Day For This

Tis' graduation weekend. Today I walk across the stage and receive that $78,000 Diploma that pretty much just says that I conformed to collegiate standards and barely scraped by on the skin of my teeth. Yay.

Anyways, magically, Yankee's jumping problem went away altogether. Jackie jumped him for her parents on Friday and he was perfect. Freakin' weirdo.

It being graduation weekend, I found someone to feed the pony for me (I'm on self care board) all weekend PM's, so I could spend it with my family that came up. Pretty awesome actually, because driving to the barn twice a day, everyday gets old REAL quick. No offense Yanks!

I got the barn early to feed and Yankee was already at the gate. Warning signs. His head was also hanging and he nickered to me. OK, big neon warning sign flashing in my face.

I remained calm and s didn't need more than .03 seconds to see what was wrong with him.

The girl who fed him last night attached his fly sheet to his cribbing collar, which was now halfway down his neck, cutting off all the circulation to the front half of his neck, and whole head. IT. WAS. SO. SWOLLEN. I almost cried!

He was in a ton of pain since the collar is meant to stay right behind his jowls and only tighten when he cribs. It was now around the meaty muscle of his neck, still as tight as it is when its where its supposed to be.

I didn't know what to do! I thought that by taking it off, all the blood would rush out of his face to quick and kill him. Crazy right? My mind thinks of the worst.

I struggled to get it off since it was so tight, but instantly after the swelling went down and he was much more chipper.

He acted liek his old self again and charged into his stall for noms. He ate his grain as usual, and I was a little relieved.

I'm still worried about damage to his muscles though. There are these massive lumps all over his neck and face and they are quite hard. GAH.

I REALLY hope this didn't permanently damage anything :/ I have a barn friend checking on him all day since I can't just leave my whole family at the Hearnes Center, watching everyone else graduate while I sit with my horse all day. But dammit. I want to!
Posted by Checkmark115 at 9:39 AM 7 comments:
Email ThisBlogThis!Share to TwitterShare to FacebookShare to Pinterest

I HATE ALL THE THINGS. Oh and Puissiance & Jumper Show Updates


I have one exam left. I need 1% point overall to get the grade I want. Meaning I need to boss this exam tomorrow and I can't for the m'fn life of me concentrate because all I can think about is how important the exam is and then I'm like "I'M GOING TO FAIL AND THEN DIE". Its a horrible vicious circle and I'm beginning to hyperventilate at midnight thinking about how I have 13 hours till the exam of doom.

In other more interesting news.

I am finally updating on things that happened last week. Literally. Apologies, but I have been up to my eyeballs in schoolwork.

Sometime last week...I think it was Thursday, Jackie and I went to the barn with the intentions of having a nice jump school with Mr. Pants before this random Jumper Show we decided to enter on Saturday.

Since we are badasses and Yankee is a monster and we have strong curious tendencies, the "Yankee Puissiance" was born.

Oh, it was really as exciting as it sounded. I almost peed my pants.

I've always had this weird issue with jumping, ever since Yankee and I slid majestically through an entire Training level course 3 years ago. I don't know what it is about stadium, but its like I clinch up slightly right before takeoff, and he feels that and jumps like shit. Totally a mind game with myself, but I have issues getting over things like that.

Unlike me though, Jackie is full of badassery and doesn't bat an eye. Coudl be the fact that she rode a massive stallion GP and basically beasted so whatever she jumps with Yankee is like, "Meh, whatevs". Love her.


What the hell, he was clearing everything with AIR to SPARE. Leke seriously, I was blown away. Up to 4'6 it went. (These are not multiple attempts either, whenever he cleared one height, I bumped it up. He was literally in attack mode he was having so much fun) 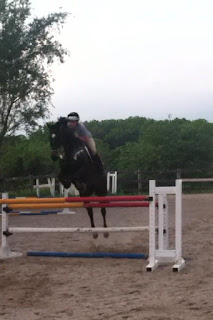 Isn't that cool? Never thought I would see my OTTB beast it out like that. Notice how his body is clearing the ENTIRE standard??

Apparently 4'6 is his max. I'll take that any day bro.

Jackie said that he "locked on" to the 4'9 but when he realized he couldn't see ove rthe top, he faltered. No prob big guy, you are solid!

We bumped it down to 4' and he cleared it handily, and again willingly, with room to spare.

Last winter I free jumped him 5'3, so I KNOW he can do that, but I think with a rider on his back (we be fatties yo) he just can't.

I hopped on to jump my guy and he refused it the first time. Gee, that didn't give me any confidence. I superbly loathe how Jackie rides my horse better than me over fences...ha! Second time at 4' we got it. Mostly cuz I almost closed my eyes. 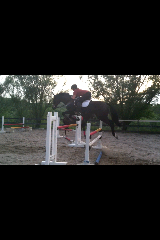 I also rode this adorable thing: 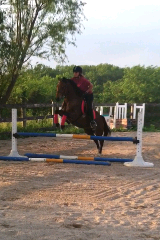 Molly! The 13h pony. She is literally the cutest, most willing pony in the world. And she's for sale! Know any little kids looking for a boss pony? Say herro to Good Golly Miss Molly!

We set out to do this show for funsies.

It ended up not being very fun.

Not only was it like 90 effing degrees and I felt like I was dying, but Yankee was very off his game and both of us were puzzled and frustrated.

He was superb in the Eq. class (which we did just as a warm-up) but she ended up in last place. I LITERALLY have no idea how. Not only did she have the nicest looking course out there-collected, got her leads, balanced, good position- but every other person tore around the course like it was a jumper class. And it looked AWFUL! I was pretty disappointed at the judge for that one. I even requested the score sheet and I had NO clue how she placed the class...whatevs.

In Jumper Table I-2'3 div. they got first, only double clear round!

He looked a little strange but of no real concern. Reminded Jackie to keep him in front of her leg.

Jumper Table II-2'6 they knocked a rail, so they got second.

This was when he started acting seriously weird....I pressed the issue of keeping him engaged and packaging before the fences, but it looked like she kept dropping him...or something. I was getting seriously annoyed she wasn't listening to me. She knows how to ride this horse. Now WHY isn't she??

SAY WHAT THE FU?

He knocked the first rail. Refused the second fence 2 times. Refused the 3rd fence. Refused the 4th. Then knocked it down. At that point I asked the judge if we could just school the course at a lower height.

Still not much better. He refused a lot. And quivered if he took it.

SERIOUSLY WEIRD. And embarrassing. I was getting tons of compliments on him for his sexy ass (Yes, one old lady really said that) and smooth gaits. I kept assuring them that it'd be cool to watch him in the III div. and that yes, OTTBs really can be successful in new careers.

Never in his life has he refused jumps. Ever. EVVVVEEERRRRR.

Jackie was upset. I was perplexed and still annoyed at what I thought was her riding. Yankee looked....depressed.

At the end of the day, we satiated our ribbon whore tendencies...but  needed to get to the bottom of the issue.

Luckily I took videos. And watched them. And concluded ot was definitely Yankee and NOT Jackie's riding.

I have a tendency to focus on my horse when she is riding him, and not really her riding. So obviously it thought it was her, because Yanks always attacks fences.

Jackie and I were mulling over possibilities of why he decided jumping was not on his to-do list for the day.

1. muscle soreness from jump schooling 2 days previous
2. cuts on the insides of BOTH legs (previous injuries) bothering him
3. The slick footing (he has massive issues with footing. Must be perfect)
4. saddle no longer fits because of all the new muscle he's gained
5. hot as hell outside

6. tail still bothering him (that fungus hasn't cleared yet)

I'm sure there were more reasons...but I can't remember right meow.

We've probably talked about his performance with each other for a total of like 3.5 hours cumulatively in the 3 days we gave him off to recoup.

Today (Wednesday) Jackie rode him again. Same tack, different boots and in an arena. She kept the jumps at 2'6, easy for him and rode him like she always does.

He was still quite "off" his game.

He refused once, then everytime after he threw in a little stutter step/hesitation.

I really cannot figure this out. He went from being a super-pony, to seemingly hating jumping..

I've made the executive decision to give him at least a week off jumping and do lots of hack works and a few dressage schools.

Until then, hopefully we can figure out this little setback before Queeny Park HT on June 7-8

Posted by Checkmark115 at 12:43 AM 4 comments:
Email ThisBlogThis!Share to TwitterShare to FacebookShare to Pinterest


HAHAHAHA suck it blogger! I figured it out. Until I gather thoughts and finish my last final (Thursday), one more procrastination attempt has been made...

...And I SWEAR on my LIFE I did not copy Eventer79 and TFS!! Great minds think alike?

Notice anything different about le blog?

Well, I sort of renamed it a bit.

And created a FB page.


Posted by Checkmark115 at 5:46 PM 2 comments:
Email ThisBlogThis!Share to TwitterShare to FacebookShare to Pinterest

Ok No clothes are coming off, but I will give you slight teaser of a future post to tantalize you into the wonderous world of Yankee the OTTB and his superpowers AND faults along with his trusty humans, Jackie and Monica. Join the chronicled adventure that is to come...

It has to do with a mini Yankee Puissiance AND A horse show  that we entered this weekend....dun dun dun!

I would post pictures but blogger absolutely REFUSES and I am about to chuck my M'FN computer out the god damn window. WHYY??