Wow, in terms of blogging "horse show hangover", this is an epic delay in updates.

What a weekend. I'm going to update separately because I hate overly long posts that drag on and on, so I won't do that to any of you. I also am not a largely eloquent or interesting writer, so theres that as well. What I'm trying to say is, I'm keeping this update to Yankee only.

GOD DAMMIT I MISSED THAT FACE

He was looking dapper as always, even with the long drive they had and the show environment. I'm always impressed with this horse and the amount of chill he has acquired with age.

I remember back in the day when I was "that girl" at the show with the psychotic beast that couldn't keep at least two feet on the ground. Now, he's every girl's dreamboat at shows. The epitome of calm.

So there's a testament to everyone who thinks their OTTBs will never calm down. Some can!


In terms of the weekend itself, it was pretty wild. Within 30 minutes of arriving on Friday we already had a tornado warning and the weather was coming in hard and fast.

If you know me at all, you know I do NOT do storms.

So that was an anxiety train that was not welcomed, and continued all.fucking.weekend. LITERALLY

I have never in my life changed T shirts more than I did at this show because of getting caught in epic, steadfast and sideways downpours.

All of that being said, Yankee was a champ for dressage on Friday.

I haven't seen him go in almost 2 years, considering USDF Champs was the last time I competed him, so I was anxious to see him be ridden by SOMEONE else. GAH.

He warmed up really well (and quickly, inbetween storms) and I couldn't pick my jaw up off the floor long enough to tell Lauren how amazing he looked before she went in the ring.

I'm not 100% sure if Lauren was tense, or he got tense but there were some tense moments.

One of the trot lengthenings was nonexistent and one of the canter circles he was overflexed. However. I thought he looked brilliant. Absolutely brilliant. His trot work has improved so much and I am constantly impressed with how nicely relaxed he stays over his back. (The link is HERE for the shitty video I took of the test.) AS an owner, I was exceptionally happy with how Lauren rode my horse. He's not an easy ride in the ring. He can be wiggily, and I was floored by how straight he stayed. No head tilting! She has also been working exceptionally hard on his canter, getting it more uphill and collected and I can really tell!

I wish judges thought the same.

Judges are weird. They have NEVER liked him.

Stadium was scheduled to begin 4 hours later aroudn 5PM, but it kept getting pushed back..and back...and back because of the torrential downpours and insane thunderstorms.

It was hard to take it all in...We were soaking wet, in the midst of another tornado warning and I couldn't help but think

The third time I scrambled to get saddles in my stall and sat there on the floor with my horse staring at me like  I was offending him I just thought "wow, I am the crazy horse lady with a pile of saddles in my lap, in the middle of a tornado, with my horses, and dog, soaking wet, at a horse show...WILLINGLY here ...what the fuck"

Anyways, stadium ended up getting cancelled for the day and rescheduled for the morning...awesome. Wonder how they were going to do all of Training level stadium and mash that in twith BN and N, PLUS XC for 3 levels.

The next day dawned and stadium began and I almost peed myself with anxiety.

Stadium has always been my weakest phase. Therefore, we almost always had rails. If I didn't think too much about it, we always went double clear because Yankee is an animal, but that was rarely because I am crazy.

Lauren blew me away with her ride. It was phenomenal. 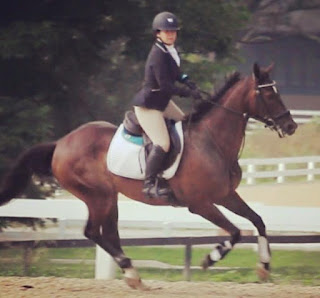 This is not just me being a "mom", but Yankee's round truly was the best one I saw that day. All day I had been wincing through rounds I witnessed. He was ON though. Every turn, every jump, fantastic.Even through the triple, I barely held my breath he was so flawless.

I wish the pictures I ordered were in, but they aren't.

Lauren also hasn't uploaded the video yet either.

He moved into 8th place after stadium which was a huge positive note in the Open Training..against pro's.

So as they prepped for XC, I felt like my bladder was going to disintegrate and I was biting my nails with anxiety.

XC truly has been our downfall over the years. I had a fall 3 years ago and never really got over it, and before then his OTTB quirks and inexperience led to refusals here and there. He really hates mud...and jump judges. Also, XC is the hardest thing to practice with course few and far between.

Did I mention he hates mud?

And guess what was everywhere? Mud. Because it was still raining and had been for 2 days.

Lauren even bought bigger, badder studs and I was just sitting there like ohmygodiwouldntevenrideinthispleasescratch because I have literally no lady balls when it comes to giant training fences even in good footing.

Which is crazy, because Yankee is an amazing jumper. I just have confidence issues and as we all know when ya quit ridin the horse quits tryin.

So here I am, peeing myself, watching them tackle warm up. He had several refusals and as an owner I just had this "feeling". Like I REALLY wanted  her to scratch and chalk it up to a loss. But I still just reminded her to really sit back and ride the fences and it was like a switch turned on for him and he ate it up after that.

Lauren said if she had 2 refusals or really felt he was backed off because of the footing, she would pull him and call it quits and I agreed that was fair. I prayed she would ride him safely and no injuries would incur. 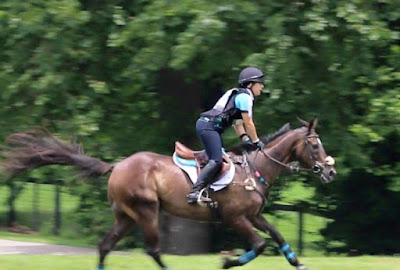 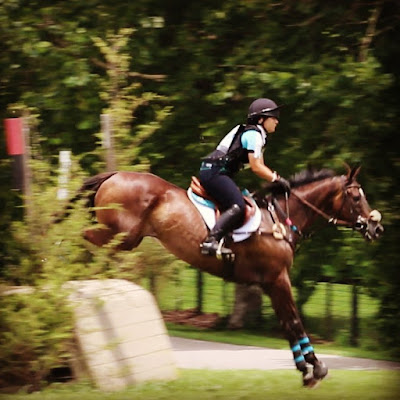 Most if their ride went well. I didn't see anything until the end but the last 5 fences were in view.

Coming up to a downhill vertical log with some hay bales in front, I could see it even hundreds of feet away. He was gonna refuse this one. Silently willing Lauren to sit back and really put her leg on I watched him slide right into it. I knew it. The footing prolly freaked him out because in no way should he have refused that fence. It was too simple. Though, we had a refusal over a fence almost the exact same as this one, almost 4 years ago at a show in MO, so I have no idea. But really, it was downhill, near the end of the course and I just saw it it 4 strides out.

He then jumped the ditch right after it and galloped through the water and up over the GIANT fucking table after it. He looked a little tired to me, but I  brushed it off.

Then I saw her pull him up.

Later I learned in the bobble he had torn his shoe off, in turn really ripped his foot to shreds. Lauren also broke her thumb when he refused, somehow, and made the decision to retire on course a few fences from home.

I was actually really relieved. He looked seriously backed off after that refusal and the last few fences were massive, IMO. Props to Lauren for a solid decision.

So thats how that ended.

Not the storybook ending, but a happy one. No injured beasts, one minor broken thumb and no tornados swept us away. My feet took a few days to recover from all the walking and swampy mess that was the KYHP, but I was proud of my team either way! 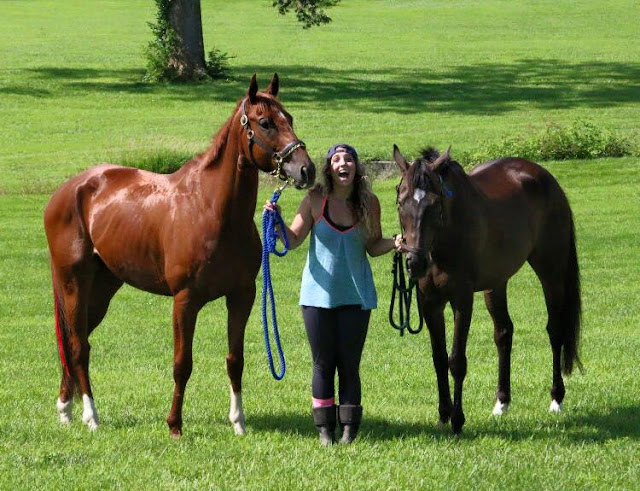 Sidenote, I do not know how you mothers watch/allow your children to compete. How did my mother ever do this? How did she not de of a heart attack?? Just watching my own horse go without me was wild enough. I don't think I could ever watch a human child of mine go around.