Are You There Vodka? Its Me, Monica.

Wow, amazing what a whiny rant on your blog, a wedding, a bonfire, heavy drinking (seriously so much drinking. Felt like college.) and a few days (like 9) can do for one's sanity. So therapeutic.

Last week, I am sure my close friends all thought I was crazy when I stated in text that I was done done with horses but I assure you, that was desperation talking, not me. Apologies, friends--you know who you are.

Thank you internet friends, for all your kind comments. I don't think you know how helpful all of you  are in times of frustration and sadness. When Yankee had surgery it was the only thing that kept me grounded. That and real life friends, but SERIOUSLY, I love bloggers.

Now that my emotions had time to recover and realize winter season is most likely not going to be as magical as first thought, I've been able to formulate a plan going forward. My plan is to not form a plan because HORSES RUIN THEM.

Until yesterday, B had been 100% 3 legged lame with a heel rash to boot, thanks to constant wrapping. V has been a doll, taking care of it while I was out of town and hand grazing him during the days this week so he got out twice a day (once w me and once with her). He's gone slightly mad and almost killed me on our walks, but is dealing with it better than expected. I really thought we would have to ace him just so he didn't mangle himself or us...

Just think of the most insanely needy giant chestnut manchild--thats him. Besides assaulting me for kisses, loves and treats, he's been holding up his leg whenever anyone looks his way, acting like its been physically cut off of him and he's dying. Quite the drama queen.

I was finally able to get to the tack store yesterday and took the suggestions of the internet and bought a Davis medicine boot. Not only did it work for soaking (praise the lort), but he was MUCH less lame with it on versus the diaper/duct tape wrap. Interesting.

Considering he literally climbed me to get out of his stall & hand walking was not working to keep him sane (MANNERS CHILD), I decided to snag the only empty paddock and toss him out there for a little bit and see what happened.

Worst thing that could happen is that the boot would come off and I would have to spend the next 40 minutes cleaning and disinfecting the foot. Whatever. He needed to get out of prison. I figured there was no way he would run around on a lame leg.

Ok. So, dumb horse is dumb. I assure you, he is still 95% lame and I don't really understand how he cantered, but he did. Evidence on my instagram. He did immediately regret the decision, and it was quite comical.

I couldn't help but laugh. Only my horse would forget he was near dead lame and run around in the paddock like a dumbass and then stumble and limp and do it all over again. Whatever B, glad you're enjoying yourself. He continued to hobble around for another ten minutes or so, then settled to graze. He really seemed happy to be out, and I'm pleased he didn't tear around too much and got to get out for a little bit with only mild crazies. I don't blame him though, he's been inside over a week with just hand grazing. Not quite the 20 acre field he's grown accustomed to, but this at least gets him outside!


Moving forward, he will get an hour of turnout each day (if he can behave) and then I will hand graze in the evenings. I'm going to test the durability of that boot and keep using it until its not needed, however long that is.  Solid $40 purchase though.

Hopefully, gradually, he will get back to normal and we can at least hack out at the walk. I fear the thought of his already sad topline disappearing completely...


Posted by Checkmark115 at 6:47 AM 14 comments:
Email ThisBlogThis!Share to TwitterShare to FacebookShare to Pinterest

I've had a really hard time writing any posts for the last week because I am so fucking bummed out about horses right now I could cry and formulating coherent, non-whiney sentences is difficult.

First it was colic surgery for Yankee (goodbye all the dollars. Literally. All.)

Then shoe issues for MONTHS with B (more dollars spent on and insane number of farrier visits, lameness, not riding)

Then after a few successful and fun shows, B got a clogged tear duct (surprisingly expensive vet visit).

Then, he lacerated his hock.

And now, punctured his foot.

These last four injuries happened within 8 days of each other. I wasn't really freaking out, more just in denial that this was actually possible for one horse to do in such a short period of time...and how??

I know, I know, it really could be worse and I've been there with Yankee. I thought for sure he was dead. But he didn't die and here we are.

But god DAMMIT I am bummed out.

This latest injury is pretty rotten. The tear duct, hock and knee were healing  well and showing no signs of lasting issue and we were enjoying our light hacks around, looking forward to rated show in November. Now, he's stuck in a stall for WEEKS.

I got a text from the barn staff last week saying he came in with a cut pastern, swollen leg and was unable to walk. Like, at all (still true).

Once I finally got to leave work to tend to The Princess, the swelling had gone down significantly, but it was pretty obvious which leg was hurting. He literally was holding it up, looking at me with the saddest eyes I've ever seen. Not the offending pastern cut that the barn staff originally thought. Cool and tight tendons was a sigh of relief. All I need is a tendon injury right now...BUT, what I did find I thought was an abscess since it was bleeding and B wouldn't put weight on it. I soaked, wrapped and left his foot for my saint of a farrier to examine the next day thinking it would be easy enough and clear up quickly. 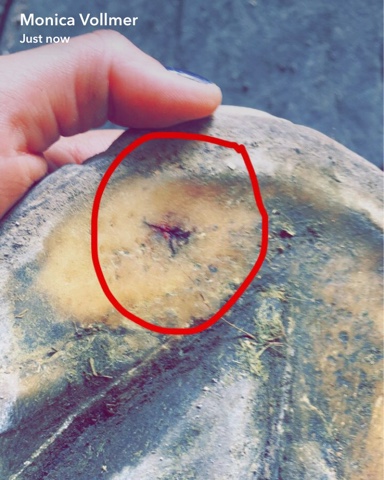 Upon further examination though, farrier deemed it a puncture wound...which is much more difficult and risky to care for. The leg swelling must've been from the cut, which went down immediately and was not in any relation to the foot injury. It looks like he stepped on a large, sharp rock, indenting the sole and creating what look like a cracked crater. He also noted that a shod horse would have gotten the same injury since shoes barely lift the foot off the ground high enough to avoid large fucking rocks of death. UGH. Considering B is not weight bearing at this time, he runs the risk of hurting his RF leg as well as infection in the LF. The vet is concerned about foreign bodies, but the farrier thinks everything is out of there and we just need to let it heal on its own and keep it clean. Which is easier said than done, since he has to be wrapped at least once daily, keep his stall as clean as possible and keep him inside. This horse does not do inside well at all and I am worried about him losing his mind.

B looks as miserable as I feel, and he is literally depressed. To make matters worse, I was gone all weekend and couldn't tend to him myself and had to have barn staff change his bandage and try to soak his foot (which he does not like). They sent me regular updates, with no changes. I did get one video of him flipping his shit during turnout because he was stuck inside when everyone else was leaving him. He was literally spin hopping in his stall since he can't use that leg...it was ridiculous. He  also still can't put weight on it today and he looks miserable. 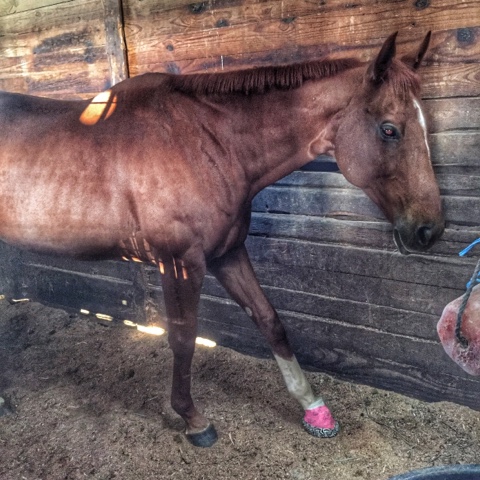 I really shouldn't be surprised at all by this. My life is a literal shitstorm and it seems when things are finally going right, something like this happens. I am incredibly bummed out that our winter season most likely won't be a thing, unless a miracle happens, and yet again B gets one year older without any competition time. Not to mention the horrible pain he's in/dying of boredom being stuck in a stall. I am 1000% done with this at the moment and I'm having a hard time with feelings and frustrations. I really feel like I need to give this whole riding thing up right about now. 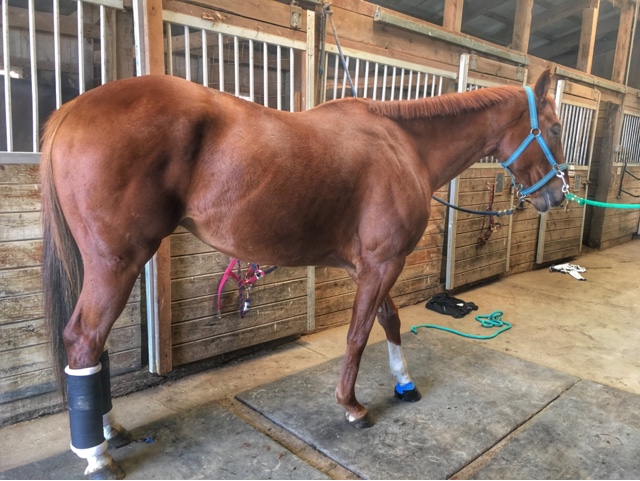 I'm having a hard time writing without constantly sounding like I'm complaining, so I'll sign off with the conclusion of that update.