Sorry I've been MIA. I know you've all dreadfully missed my droll posts. Life after graduation, especially after breaking up with one's boyfriend, with no hope of a big girl job, avoiding looking at final grades and no real hopes for the future, can be quite depressing.

Yankee has been off almost as much as me with Jackie working her pa-tooty off to pay for Queeny and me laying around feeling sorry for myself. However, Sunday dawned bright and early and we packed up pony and headed to STL to school XC for the day!

ALSO. New scrim sheet. $20 on consignment for the WIN. Reason I was at the tack store? to pick up these babies (rented)...

AS some of you may know, I've been in a 6 year predicament with the bitting situation for said horse. When he was right off the track I used a rubber mouthed 3-ring. Worked for a few years and was the right leverage and whatnot. Once he got more responsive and well trained, I bumped it down to a waterford full chek. He didn't respect that at all. Then I tried a waterford loose ring. Respected...for the most part. He still tried to take the bit in his mouth and charge after every fence. He's not being naughty, just exuberant.

Anyways, we set off at 7AM for STL, settled in with snacks and a full gas tank, ready for the drive. It went wihthout a hitch and we arrived around 9, checked in, and tacked up! Yankee was so perfect. Not once did he act up likr he used to as a baby OTTB, I never thought I would see the day I had a well behaved horse!!

It was already like 85 degrees, and we were both drenched just from tacking up...Cue pack mule Monica.

I brought 2 waters, a change of gloves, our phones (of course), my keys, our money and a spare bridle (for the meyler bit #2)

At first...we had issues...Lots of issues. I was getting a titch worried about them competing at Training in 2 weeks. Yankee refused everything. Well, almost everything. At first I attributed it to the grass. It was long, and Yankee is a little bitch about footing. But he then refused this log into the water like 5 times....

Then he refused little logs. The down bank. Twice.

PERPLEXED. Where is my cross-country-attack-horse-machine I know and love?

Poor jackie I think was a bit embarrassed, since we were "with" a group of about 6 (one of whom is an old friend who I love and missed dearly!) and Yanks was being a jackass. She was doing the best she could but he was refusing like he didn't even WANT to jump.

Eventually after mastering the Novice stuff, ( -_-)  we meandered to another bank complex.

WHAT THE FLIP YANKEE?!

I was out of explanations. He would "lock on" to a fence, then just decide last minute, "no thanks" and either slide to a stop (dangerously I might add, I thought he was going to flip twice) or ducked out. Once, Jackie almost fell off, landing on his neck. I felt SO bad.

I was concerned now. He was refusing things that were EASY to him. Not like we were facing him up against massive Prelim stuff as warm-up, we were doing the Novice jumps and small training questions.

After moving on to another complex with a hanging log (T), banks up and down (P&T) and some free standing jumps like a chevron, hogsback and tiger trap (all T) and him STILL refusing things completely randomly (he would jump it beautifully twice, then refuse it the third time...???) and seeing  him almost run off with Jackie (scary), I switched bits to the leverage Meyler.

That and the combination of my dumb-ass brain FINALLY putting together WHY he was fizzling out a stride before (Jackie was unintentionally dropping him. Meaning, with her grand prix horses, she was used to setting them up for the fence, then not touching them. Not really "dropping" but in a sense, thats what Yankee thought. He didn't feel her support all the way to the fence, so he just didn't do it. I finally figured it out, took long enough!) and when we fixed it, he was an effing badass!!!

He tackled all the Prelim stuff without hesitation and had a renewed vigor for schooling.

PHEW! I was getting worried.

My favorite moment of the day is when he completely sailed over this massive chevron table... 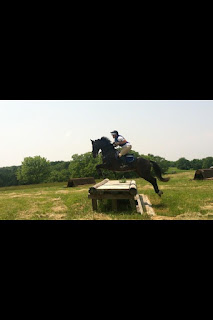 I was almost filled with tears! HAHA.

It was great feeling, finally getting to see your horse jump something so massive, so perfectly!

After 2 hours of schooling, walking all over creation and sweating our balls off, we called it a day and headed back to the trailer for a well earned bath.

I'm really glad we figured it out before the show, AND actually went to do this. Yeah, it was 4 hours round trip and costed us about $150, but it was well worth it.

I got super spoiled in OH, we had a FULL XC course starter-intermediate about 20 min. form my house...gah!

Only "bad" thing that came out of this was that  it is 100% obvious that the meyler bit is perfect for Yankee. It doesn't collapse in his mouth, doesn't over flex him, and puts pressur e on his nose when it needs to. Sadly its $150.

It would be.
Posted by Checkmark115 at 5:56 PM 5 comments:
Email ThisBlogThis!Share to TwitterShare to FacebookShare to Pinterest
Newer Posts Older Posts Home
Subscribe to: Posts (Atom)