Still no real movement over here on the Vollmer homestead. I'm still a fat turd doing nothing but watching Greys. If I didnt have horses to force me outside occasionally, I think I would literally hibernate and not come out till spring.

The weather situation has not improved. Temps rose above an Arctic howl and I was able to at least go outside without a full face mask (YAY POSITIVE SIDE). Also, my hose didnt freeze, thanks to adequate drainage techniques, and I was able to fill the water tank. My heater is in the fritz, but its just keeping me on my toes and in ice chopping shape. Barn door is still frozen shut, and all the cardio going around back, is at least keeping me from becoming a blob.

Still have not ridden. 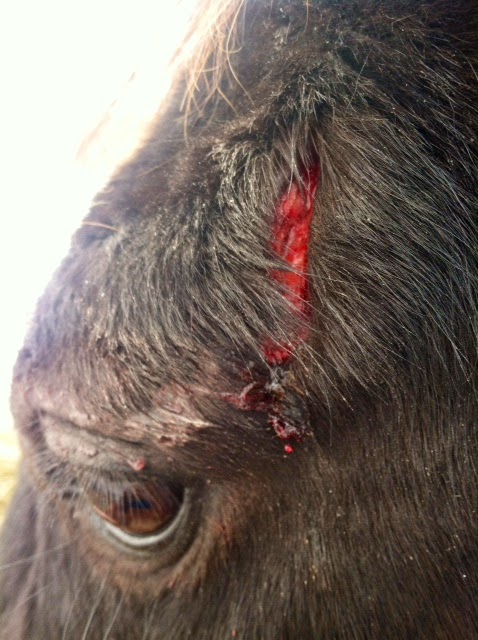 Plus side of that, did not get her eye. Very plus.

At first I panicked at the sight of it. Beacuse I'm Anxiety Girl. Thankfully Old Mare is quiet and let me examine it closer. She did not let me shave around it thought, and I think it needs stitches. Not sure. Many issues with that type of cut though. Not really sure the skin can be pulled close enough TO stitch. Also, I'm pretty positive everytime she moved her jaw to chew it would pop them anyways. Wounds in winter are very annoying. It doesn't seem to bother her much, which is also a plus. Luckily, I have vet friends that think it was OK to wait to call a vet out, so no emergency vet bill. First thing tomorrow though!

After tending to ancient horsebeast, I did manage to fill some part of my day re-clipping the baby horsebeast.

I was reluctant to try, because of the hell we went through the first time. But he was really getting ratchet. I call the re-growth "onion hairs" because they remind me of the uneven and gross hairs that grow off of old onions. And grown out clipped coats are gross.

My hell with him is really nothing, I'm just spoiled with Yankee's behavior. Which is perfect, for the record.

To prevent wide eyed stares, nervous twitches and minor pulling back in the cross-ties I decided it was best to mitigate with food.

JUST STUFF HIS FACE WITH FOOD.

I also noticed that he visibly relaxed when I sang along to my ipod.

So I force fed him treats and rapped sang Lil Wayne to him for an hour and we got it done with no real melt-downs.


He looks a little ridiculous with only half his face shaved but I cannot STAND goat hairs on the chin. SO I had to at least get the bottom. I really wanted to smooth it out a little more, or get all of his face. But I also do not want a 17.1hh Thoroughbred rearing into the rafters with me so I avoided it to remain alive. Also, with the weather we've ben having, I figured it was more protection for his Princess face.

I actually was very impressed that he was so calm and non spastic for face clipping. In general really, he acted like an adult for once. Perhaps he's learning how to horse after all.

And then he posed for pictures.

I swear to God this horse is THE best poser. I don't know if this had to do with his old owner using him as the subject of her art, or if he just loves the attention, but I can leave him alone, back away and he will strike poses all fucking day.

You will notice the adorable bonnet he's modeling. We will eventually be rocking that over some sick stadium courses, but for now we will appreciate Jackie for giving it to me for my birthday.

Its in four days in case you were wondering.

The Boy has planned an amazing trip to TB for my birthday, and we depart Thurs for 4 days, so I think I will continue to not ride.

Considering its currently spitting ice outside and covering everything the light touches with slick surfaces, I do not think I will even be able to turnout, so riding is out of the question.

I will think of it as a mini vacation inside a vacation for the beast.

Consider that foreshadowing for our next episode of "What Do Wednesday" coming this Wednesday.

Also I hate all of you that have indoors.


Posted by Checkmark115 at 8:33 PM
Email ThisBlogThis!Share to TwitterShare to FacebookShare to Pinterest