I have  two, yes TWO posts chilling in drafts, which never actually happens. But I did want to discuss some things after the show this weekend. Excuse formatting, always. Posting from iPhone app.

First, thank you ALL (even non-bloggers on Facebook who wont see this but, whatever) for the congrats even for 3rd and 4th place. Its no AECs win, but hes come so far this year, I'm just elated.

That being said, he was very veryyyyy ouchy after his two days off.

I came back on Monday for our evening ride and he was just wild. They had been in since the show because of insane rain and mud and he was ancy as could be.

Second I got on his back I felt him hump his back, brace and shorten his neck and I though "ohhhh lord The Real Bacardi is back in town, its gonna get spicy"/

It wasnt spicy. He was just feeling his oats and his soreness.

I never did pinpoint where it was stemming from, but it was most apparent a the left lead canter. I could just barely feel it, and the people on the ground couldn't really tell either. A couple of EMEM girls were like, what are you talking about crazy lady. Then I sat and asked for PROPER bend (holyshithowevil) and it was obvious, the dude was sore. Not limping in pain, but definitely not feeling fantastic.

I felt bad. I know how awful I feel after a rough workout even days later and theres only so much active recovery that feels good. Brought him back to a walk and worked some lateral movement for a bit, but he really wasnt feeling it at all. After some turns on the forehand and backing I let him chill and watch the lesson and the girl trying out horses. It was bustly, per usual.

Later, the girl who came to try horses compliments how nice of a mover Bacardi was and I was SO tempted to hint he might-possibly-could-be-maybe-for-sale for the right price, but didnt.

That did make me feel good though, on a bad day, he was still impressive to someone who doesnt know him.

Damn straight, thats why I bought him. Flashy AF. Lord knows I didnt buy him for his brains. [loljk B, I love you.]

I let him rest another day, hoping they would get turnout and some space to run around, and they did. Oh did they. Somehow, I'm done even trying to figure out how he destroys blankets, he snapped the buckles in half off the front of his medium TO blanket. How B, how?

Annoying bastard. Now I need two more blankets that I can't afford. Maybe there's a repairman around here.
I did get the chance to try out my new toys that I purchased on a whim during a flash sale at smartpak. They own me haha. 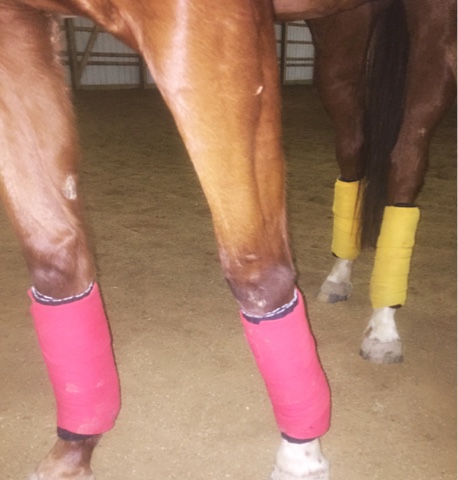 Those of you may have read sprinklerbandits review about her polo liners, and it solidified my excuse to buy them. I ended up getting the eskadrons since Aimee had recommended them and I trust her. Plus they really are better.   I've wanted them for quite some time (try two years) and justified it with the sale.
Happily, I have no idea they came in a four pack! Bonus!
My only small complaint is that the whites of the insides show. Like the edges aren't clean or seen. Looks a little messy. Otherwise I really loved them and so did B! I might do a review on them later.
With his yummy polos and wraps, he settled into a very stiff, but well behaved  20m circle on the lunge. He was so stiff, it hurt me. I asked for tons of transitions and about 20 min later asked for some stretches.
We did carrot stretches with sugar cubes (which he LOVED) and some flexin and extensions on all four legs. I could really feel his inflexibility in his hinds. Need. MOAR. Stretching.
The sugar cubes must've possessed magical powers though, and he was a dream to ride from there. Either the stretching and lunging really helped him unstick or the sugar was making him work his jaw and therefore was making magic within his usually tense neck.
He was perfectly content and WANTED. To trot around on the buckle, so we did for like 10 minutes. Paused to watch some of the jump lesson, did some more stretchy trot, and worked on more turns on the forehand without any tantrums (huge deal for B, huge).
SUPER interesting ride, I know, but I felt it was major progress/breakthrough/bonding, whatever you want to call it. Just a damn good ride with a lot of relaxation. 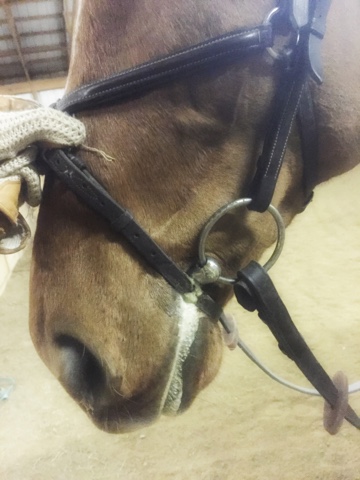 All the foam. All of it. 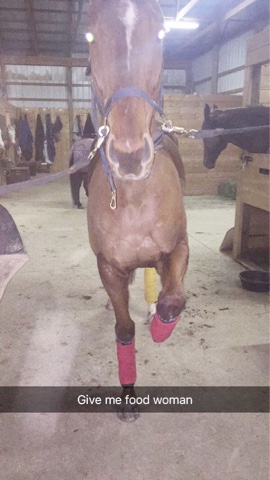 I have all week off next week, which gives me tons of time to ride. For once I won't be complaining about warm temps in December and will take full advantage of all the free time!
Posted by Checkmark115 at 8:45 PM
Email ThisBlogThis!Share to TwitterShare to FacebookShare to Pinterest