What Do Wednesday: Foodstuffs

I am going to do my best here to incorporate both the beasts back into the blog, even though the horse I am/will be riding the most is Bacardi. Yankee will always be best pony and he is forever my heart horse and OG.

Good news all around on the Yankee front;

1. He has returned to work
2. He is moving to The Palace (EME barn nicknamed by me)
3. He is getting fat
4. He has a leaser (more on this later) 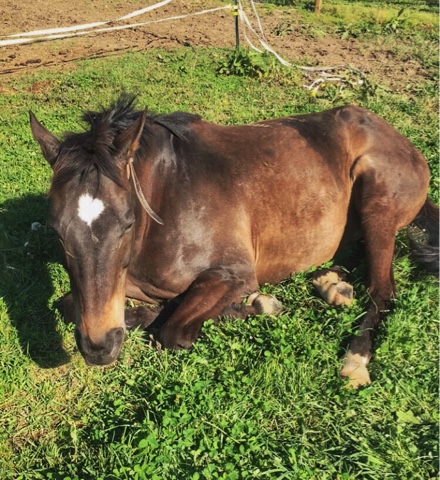 How freaking adorable is he?? Woke up to the two ponies sleeping outside my window, so of course I dashed out to get pics thinking they would get up soon. I literally had to pry Yankee off the ground to come in for breakfast. SO adorable.

So the most earth shattering news is that Yankee got to go back to work.

Technically, per vet discharge notes, it says nothing about "light lunging allowed" but my line of thinking s if he can be out in a pasture 8 hours a day where can gallop around (and DOES), he can be lunged ten minutes a day.

The count down has commenced for flatwork though, and I literally can't wait. I haven't been on his back in over TWO years and he was so bored having been off and confined to small spaces since February. I plan to lightly lunge him every 3 days or so for about 10 minutes, just to get some movement back and try and get the small remaining swelling down from his incision site.

Otherwise, hoping to build a little muscle, since his topline is almost nonexistent despite recent weight gain. He was SO happy when I pulled out the bridle. Even with the "wrong" bit (he favors a fat french link, and I of course sold all my spare tack on ETT) he was working well and I was mildly impressed at how supple he seemed. 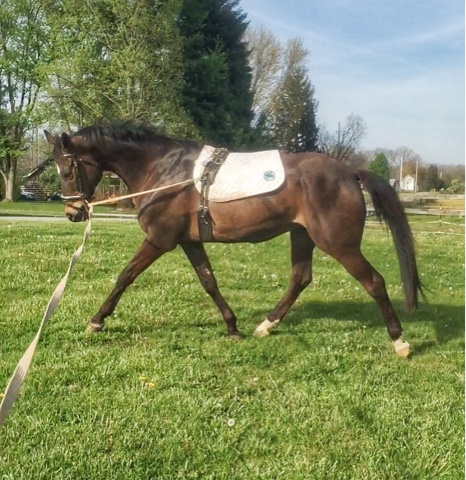 I even let him canter for a few rounds each way, and minus a small, light-hearted, exuberant bucking fit, he was so workmanlike and lovely, I almost cried. Seriously look at that uphill canter. I swear this isn't just a cherry picked screenshot, this is how he went around the entire time. 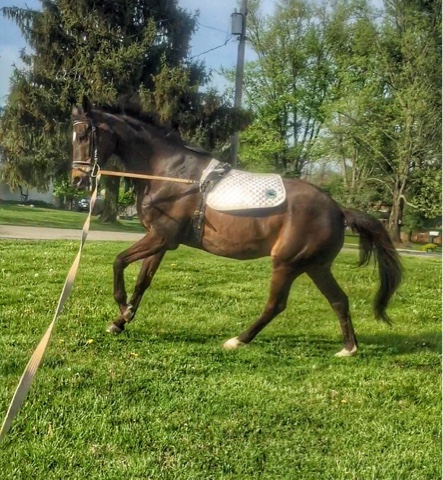 I almost forgot how easy and cool he is to work with after 2 years away from him. At 14, he's just so steady and really knows his jobs and loves it. As I mentioned previously, he was so incredibly bored standing around in a small paddock. Its almost like he was overjoyed to be back at work!

Here's a few more semi-boring gratuitous screenshots from lunging that I couldn't stop swooning over. I seriously stared at them for hours. Admiring my horse and all his wonderful, fat, relaxed glory.

So really what I wanted to talk about here besides a super boring lunging sesh (I am anything but bored by it, since he was hanging on the brink of death a few months ago, but thats just me), is his DRASTIC weight change in just a few weeks.

Pictured below was 11 days post-op, right off the trailer at the boarding/recovery barn. I wish he was shaved so you could see his body condition a bit better, but I'm sure using your imagination isn't too difficult considering his hipbones are sticking out and he looks like he's 37 years old.

The second picture is approx 8 weeks post op (I think) and his caretaker at the boarding barn had him for 5 of those weeks and I had him for about 2. His caretaker/vet did an amazing job of weaning him back on to grain and carefully compiling a structured feed program to get him back on the eating game. A lot of it was forage at first, and still is. 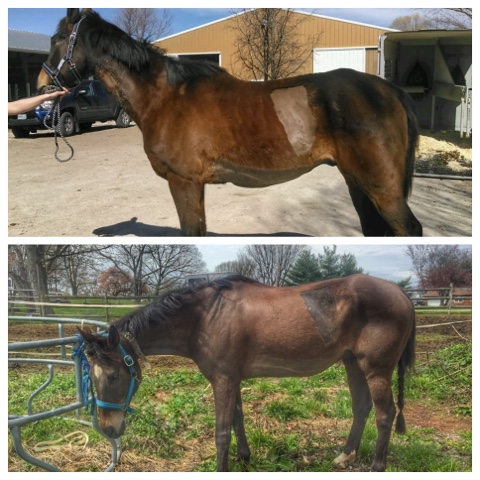 The difference is astounding to me. There's a bit of winter coat in there, but he gained so much in-between those two pictures, it was crazy! He has only been making gainz since then as well and currently is a little nugget! I think he might almost be TOO fat now, with the biggest hay belly ever, but I'll take it.

I've done a terrible job getting progress pics, and I wish I had done a weekly thing, but I didn't so, WHOMP WHOMP. Still pretty evident.

So what I wanted to do was share my "secrets". I say secrets because they aren't really secrets and I don't know everything about equine nutrition. In fact, I learned a lot along the way with his vet.

I used to think equine nutrition was just about fat and protein content and that was about it. High protein was good and high fat was good, for my OTTBs.

Then I learned stuff and things, and its not always about the "highest amount of protein and fat" wins the best grain award.

For Yankee, because of his ulcers and propensity to colic, as well as his severe malnutrition, I was advised to keep his starch as low as possible, as well as a high fiber content and low sugar.

WTF I had to compare starch, fiber and sugar content now too?

Unfortunately, not all feed labels their grain with starch content on the bag, so I took to google. I have always been big on SafeChoice grains when my boys were home, the "performance" kind., and his vets recommened the SafeChoice brand as well. There are better grains, but we have limited options here and getting fancy grains is almost impossible. I did my research though, and it was kind of cool to relearn that protein and fat aren't everything. Safe choice also has senior, complete, maintenance, & special care. Yankee was on special care in MO, but no store around me carries it or anything like it, so I ended up going with Safechoice Senior.


Versus, what he USED to get, Nutrena SafeChoice Perform

Isn' that interesting? I found it interesting that the performance brand has a ton more starch that I originally thought it would have, compared to the other types, and the same amount of protein.

Now, this was just one part of his feeding regime. The largest part, at 5lbs per feeding, but he needed a LOT more fat than what was in the grain. I had heard great things about Nutrena Empower Boost and luckily my feed store carried it.

The goodies;
All the things! Added benefits of Vit E and Selenium, since this area is deficient and I usually would buy in Smartpaks. I know the starch was high in this, so he only gets 1lb per feeding as a top dressing. This was approved by the vet and recommended as well. One bag lasted me about a month and it was relatively cheap too.

One last thing I have been adding as another top dressing is 1/2lb of oats and 1lb of alfalfa pellets. Yankee GOBBLES up his "grain cocktail" and the results speak for themselves.

Additionally, he is getting an absolute fuck load of hay. Approximately half a bale in the AM, which is like 8 flakes or like 40lbs or some shit. He usually eats about 92% of it too. The key to success is the hay! Then, he's on night turnout. FORAGE.

To recap; each feeding:
5lbs SafeChoice
1lb empower boost
1/2lb oats
1lb alfalfa pellets
A fuckload of hay
+smartpaks, ProBios, Biotin and MSM
Now obviously this is a "loading" dose and I doubt he will get this much grain once he's back in work unless he's really gettin his ass kicked. I was actually surprised at the sheer volume of grain that he has been eating, but it has all been approved by the vet and its working!

So dear readers, what I wan to know is kind of a two parter;
1. Do you spend a ton of time reading labels and making comparisons? Does you horse need a lot, or are they easy keepers?
2. if your horse is skinny, what do you use to fatten them up??
I'm so curious! Feed me your secrets!!
Posted by Checkmark115 at 9:22 PM
Email ThisBlogThis!Share to TwitterShare to FacebookShare to Pinterest