My favorite thing about this new job (minus, ya know, the money) is the fact that I don't have to work until 7 or 9 PM every damn day and I can actually plan to do pony things after work.

Granted, this only lasts until fall, and then the seasons betray me and the sun goes to sleep at 4:30, but whatever.

Regardless, I am rejoicing in it now, and on Tuesday we had the boys locked and loading and ready to go before 5PM

B also got almost right on the trailer too (a legit massive deal)...getting him OFF is the hard part. Poor guy hates backing out and I actually don't blame him, that step down has got to be terrifying when you can't see where your feet are behind you. Literally took him 10 minutes to come out on his own once we arrived at our destination. Then there's Yankee who self loads and comes out with just a tug of his tail. They are are adorable though.

We are incredibly lucky to have a huge public equestrian park very close to our barn. I think the drive is less than 30 minutes and I used to go every week back when USEA shows were actually held there and the jumps were maintained better.

Now its sort of a last resort when we can't get down to KY, but the jumps are still fun and the fields still vast. 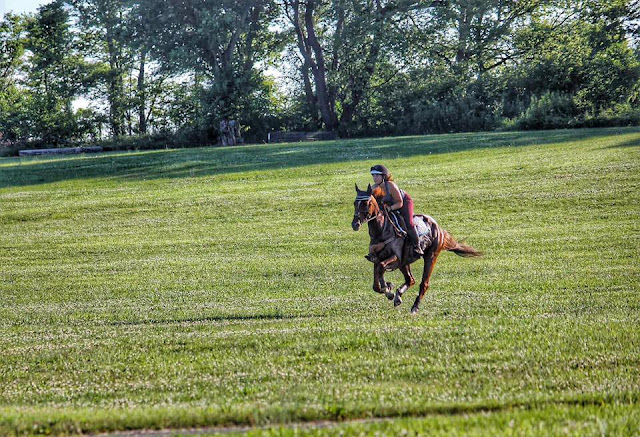 We made the trip because Yankee and V have an event in KY in (less) two weeks at BN and had yet to school XC. While the height is NOTHING to him (literally), he is rather....exuberant over fences on cross and I needed her to feel it and learn how to wrangle the energy.

The good news with Yanks is that he knows his job, knows what a half halt is and can jump out of a gallop flawlessly. The trick was getting V used to that energy and method. His XC game is like no other I've ever ridden. 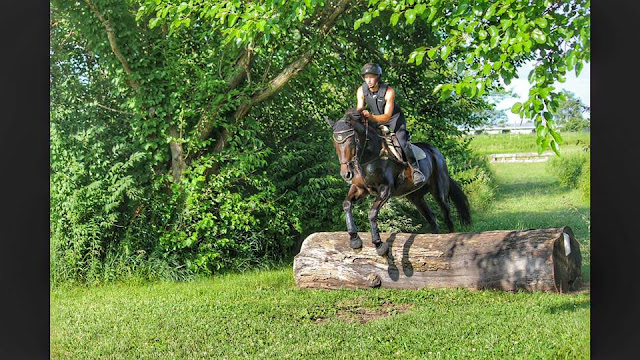 At first they struggled a bit. I was not concerned. I knew she would adjust and that they would work it out, but the majority of the first half hour was Yanks running sideways and V not really sure what to do. It can be a bit different when you're used to a more relaxed horse, because Yankee acts like he's going to take off on you...but really won't. Its hard to describe. But choke holds on the bit only get him more riled up and when V realized it was ok to relax, Yanks did too and it was awesome.

B unfortunately didn't get the memo and was uncooperative in my plan to JUST HANG OUT and watch. He was lit. Like, absolutelyfuckingretarded. Could not and would not stand still. I also spent the majority of the first half hour wrestling his crazy ass and gave in. I really wanted to take it easy since he was off almost 5 weeks, but he was telling me no. He also was taking full advantage of the fact that I had no running martingale because I forgot to put reins stops on my reins...

B, you have to chill, its not hard
"NO. MUST RUN. RUN FAST. Yankee gets to run whynotme leggo! leggo!"
B stahp, stand sti--NO! Stand OH my god
"RUNRUNRUNRUNRUNmustRUN"
This is insa--literally fuck you, plant your feet you asshole!
"no fuck you and your rules BYE"
*wrestles horse to a stop*
*horse backs up for 30 minutes*
*rears*
"but mahhmm, jumps!run!stuff!things! LETS GO"
FINE

....and then I let him hop over a jump and he visibly relaxed and I was like alright then

I swear I tried to not jump back in to things (see what I did there), but B had other plans. I didn't overdo it by any means, but I did hop him over a few things to keep him from exploding into more madness. 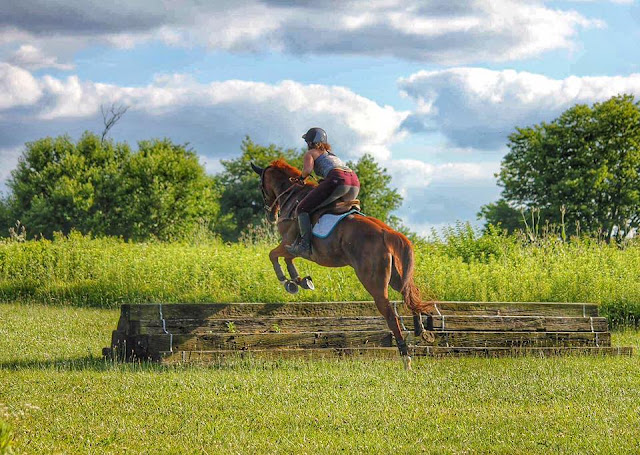 So, we meandered around the park, me lackadaisically instructing to "jump this" or "pop over that" while simultaneously attempting to keep baby horse entertained and quiet.

For the most part, V and Yanks were on point as a team. I intentionally let V take him over some bigger jumps just to get a feel of what he's like and prepare a little bit more for what next weekend might be like. I think his actual last USEA event was actually Champagne Run last year when B and I went down to visit him. So I know he will be a bit stronger than normal, even if just running BN. 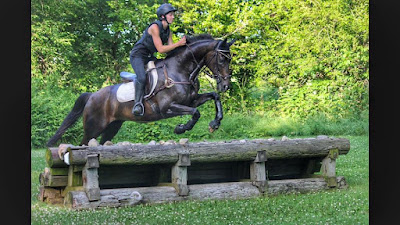 Just as with stadium, Yanks was jumping better and better over the bigger stuff...but I also didn't want to push it. It was HOT and incredibly humid and they were doin some work. Its always hard to remember he had major surgery in Feb., since he bounced back so spectacularly. He was thoroughly enjoying himself though and once V got the hang of his unique style, she seemed to have a blast as well! it was hard to call keep it under check and eventually call it quits. 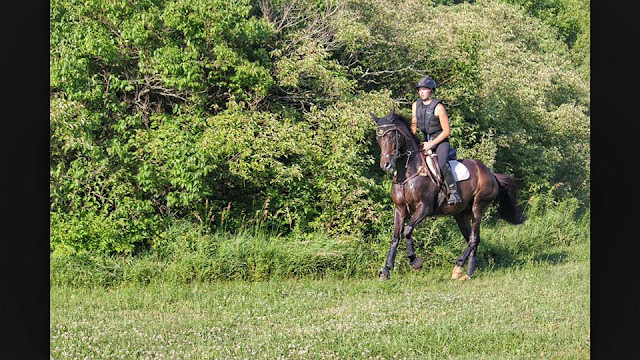 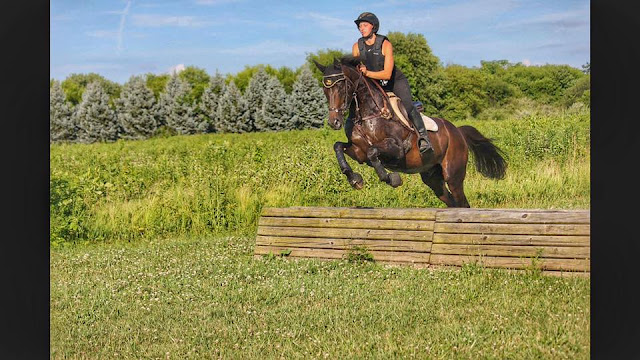 After jumping most of the novice fences 1-3 times I called it a day for Yankee and took B over a few more jumps and then let him run. 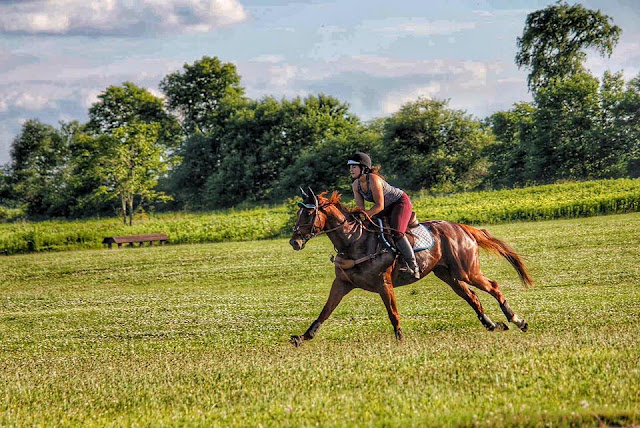 I've never actually let him run full out, and still didn't because I was fearful of losing our precious shoe. Within 45 minutes of our excursion he had torn the bellboot off of the problem foot (why am I surprised) so I was extra nervous to actually run. That and also he is a freight train and is mildly terrifying to gallop.

After we sponged them off, B loaded up RIGHT AWAY and we headed home tired but happy.

This weekend we are hoping to head over to a jumper schooling show with both boys and putz around over some 2 foot courses. Then, a week of work and off to Champagne with Yankee!
Posted by Checkmark115 at 6:47 AM
Email ThisBlogThis!Share to TwitterShare to FacebookShare to Pinterest