If you're not all caught up, The OG had colic surgery late Friday night and is now slowly recovering. Quite possibly the worst 24 hours of my life, and nothing I want to repeat ever again. The second Yankee went into surgery, I went on Smartpak and played with Bacardi's supps and applied for ColiCare. He was approved and coverage starts next month, and I feel a little relieved with that. We had actually just cancelled Yankee's insurance, so that was a major learning lesson. Unfortunately, he is never eligible again for colic insurance, since he had surgery and now is considered high risk, which is frustrating.

Again, thank you all for the well-wishes! I haven't been able to respond to everyone, but I have read them. Thank you!

So for those of you who've never been in this situation (praying that remains) I'll give a brief rundown of how it unfolded. The worst part was that I am 4 states away from The Precious, and Jackie was calling/texting, the vet was calling me and my mom and we were all trying to stay in the loop and make decisions. That was the worst. Jackie might be the real hero here, since she made the wise decision to take him to the hospital, kept her cool, and essentially stayed awake for 48 hours straight. SAINT.

It all started about 9 AM on Friday when Jackie texted me after receiving a call from her barn that Yankee was down in the field, colicking and she was leaving work to go be by his side. The vet was called and it looked grim. In all my previous bouts of colic (7 with my own horses unfortunately, 4 with Yankee) it was mild and generally cleared up in a a few hours. Its always scary, but this was horrifying.

I cant even explain the jolting terror coursing through my body when she said that the vet felt torsion of his gut and a displaced spleen. They weren't sure about impaction either, so the vet oiled him, and tried to manually rotate his organs back in place through a rectal exam, and the plan was to wait a few hours and see if he improved.

My guess is the wild temperature change caused him to begin to colic and then being out all night, he just rolled his insides out of place. Horses, y u so sensitive??

He was worsening by the hour, and Jackie made the snap decision to take him to the hospital. Its about a 3 hour drive, so the sooner the better. I believe it this time it was about 3PM. I was quite literally, panicking.

This entire time, I was at work, pretending I was't dying of anxiety. I ended up charging my phone 4 times that day, I was on it so much texting back and forth with Jackie and my mother. Also, my heart was racing all day with worry. I have a FitBit and it captured all the drama with my HR monitor; the spikes in HR prove a pretty accurate timeline of all the news I received throughout the day.

Then, of course, a tire on the trailer blew on the way to the hospital. Fantastic. She told me this and I literally wanted to die. Like, what else? I felt terrible she was having to deal with this and I was completely useless all the way in Ohio. They had to unload him in order to change the tire, and he was a true champion and didn't bat an eyeball. I seriously love that horse. I don't think Bacardi would cooperate like this. 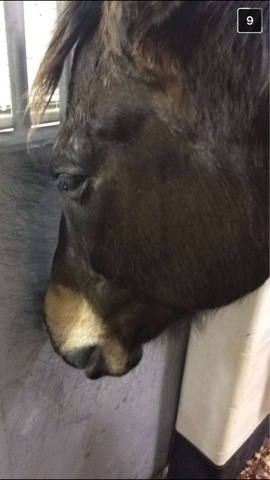 Around 7:15 PM my time, they had him stabilized and called us with updates. Mom and I were at dinner with some people, trying to seem normal, but we got the call and rushed to the bathroom. They were explaining what they found with radiographs, X-rays and other preliminary tests. The belly tap showed elevated levels of white blood cells and fluid in the abdomen. With the X-ray/radiographs, they confirmed his organs were out of place. Usually, the trailer rides jolts the spleen back in place, but it did not. They also explained they were giving him a drug to raise his blood pressure and hopefully get the spleen to fall back into place. I was holding back tears as they ere explaining that in 10% of "older" horses, it causes them to bleed out. She then asked what our monetary cap on euthanization was. At this point, I literally blacked out. I don't remember what was said, or done, I just remember later my mom hugging me and telling me it was going to be okay and she wouldn't let Yankee die. They then said they were going to observe him overnight and call in the AM regarding possibly going in for surgery. It seemed all was settling down. I tried to calm down.

The kicker was the money. I obviously could not afford a $7000-9000 surgery and they wanted the money up front before surgery was even started. My parents stepped up without me even asking,  taking in the burden and footed the bill, for which I am eternally grateful. There are no words to explain, I think everyone knows how harrowing of a decision that could be. My mother especially loves Yankee, and he's been with us for so long. On my own, he most likely would have been put down, which I can't even begin to think about. Sure, he's "just a horse" to outsiders, but Yankee has been my everything for 11 years. Sure, he was 4 states away, but he will always be my heart horse. What kind of person is able to make that decision under such pressure? I sure wasn't.

Anyways, 30 minutes later they call us stating he was down and they wanted to operate. His blood cell count had dropped too low and he was showing even more signs of distress. They needed to operate immediately.

Again, I blacked out. I was oddly calm. Like it wasn't real. I set my fork down and said "I need to go home now", and drove home. I pretty much sat on the couch, paralyzed with fear I didn't feel until I slipped into sleep around 1AM. Mom shook me awake at 2AM letting me know Yankee made it off the table and I finally felt OK to go to bed. The next morning, we got another call, Jackie sent pictures and we learned a lot of things. Not only did he colic, but he had some sort of bacterial infection, horrendous scarring in his bowels and stomach ulcers. The scarring we were told could have been from anything. Ulcers from the track, previous colic, even parasites. I was dying inside, thinking what a terrible owner I was for letting this happen. How dare I send him away from me. I was the worst.

I had been sure to always worm him and rotate medications. He has been treated yearly for ulcers, since we know he's susceptible to them after we scoped him as a 5 year old. I was at a loss, I thought I had done everything.

As if reading my mind, the vet said there was no real cause to this episode, this was just side issues they discovered in surgery, which was extensive. He would pull through, just need more maintenance later on.

As for how he was doing, he was weak, hot and tired. It was still 75* there, and he had a full winter coat. Recovery was slow ad he did not want to eat. The entire weekend I spent trying not to wallow in despair. We also didn't know what was going to happen from here.

Recovery time is about 90 days. 30 of that he MUST spend in MO, since he is not fit for travel. They wanted to keep him at the hospital another 2 weeks as well. Obviously, he won't compete this year, at least at Training level, so we needed to think about what was best for Yankee. I advised Jackie he most likely would be coming back to OH and that competing was out of the question. Luckily, she understood, I just felt terrible. She just got him and was so looking forward to the season with him...which is shitty and I feel guilty about.

So for now, he is tentatively coming home in 4 weeks. Thats an 8 hour trailer ride, and it has to be approved by the vet. Until then, on he is cleared to leave the hospital, he will stay at my old barn that I boarded at in college. Everyone there has stepped up and offered to care for him until he is ready to make the trip home, and I am again, so grateful. I've been researching the fuck out of "post-op colic surgery" and most horses recovery fully and to their previous fitness level just fine within 6 months or less. Even at 14, his prognoses is good. The downside, is he will now be even more susceptible to colic, which makes me NEVER want him to leave my sight again. Ever.

The real truth though is that I cannot afford to show two horses, let alone one now, or even board two. For now, he will be okay at our home when he returns. Actually, it is the perfect place for him. He's familiar with it, I will have eyeballs on him daily and we have small turnout pens in addition to large pasture, which are required for rehab. Finding him a buddy will be tough, but we have 4 weeks.

Eventually, I would like to get him in my trainers lesson program, or lease him to a Young Rider and have him stabled at EME so both my boys are together, but again we will cross that bridge soon enough.

For now, I need to focus on making our property as horse friendly again as possible (we kind of tore down everything) and finding a hay supplier.

I am actually kind of excited, despite the financial burden (aka, may not get to show Bacardi this year now), to have my boy back and take him for his rehab rides out back in our fields. Just relieved he is still with us and looking much better today... 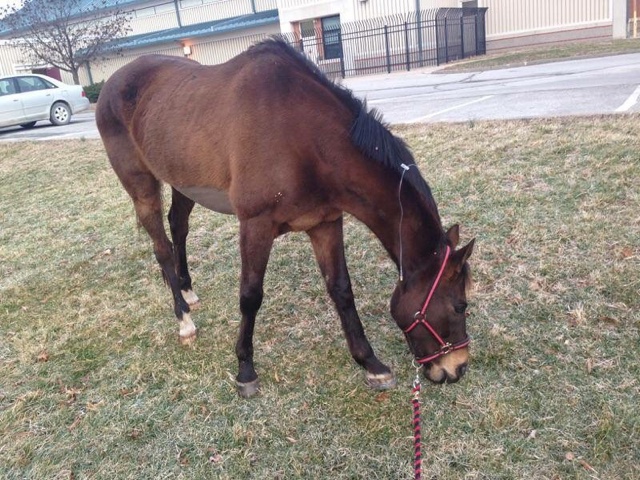 I was alarmed at the amount of weight he's lost and how terrible his coat looks, but again, just happy he's here! By the looks of it, he's able to get had walked as well and nibble on some winter grass.

Positive thoughts for a swift recovery my man!


Posted by Checkmark115 at 1:06 PM
Email ThisBlogThis!Share to TwitterShare to FacebookShare to Pinterest