We Have a Bit...Of a Problem

Thats actually a really punny title. You'll find out why if you keep reading.

I have no fun show updates like the rest of you, but it was a pretty good week/weekend in term of riding. But I do have several other small updates to make. Try to pay attention.

So all last week and the week before, while my beautiful new dressage bridle was at the tailors, because Bacardi is a superstar at breaking shit.... 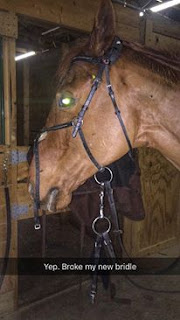 ...I was using my jump bridle/bit to do flatwork because thats all I had. Poor planning/I might need a spare bridle set for future reference.

He was absolutely stunning all week. No tantrums (those are rare these days) and even better, no giraffe resisting. I was pretty confident and happy with how things were going.

I then got the precious back and went ahead and rode in the correct tack.

So we revisited the standing martingale and the lunge line of discovery. Much shorter lesson this time at 10 minutes and then he was like, FINE.

Then I thought about it. He is ALWAYS perfect in my jump tack. Rarely flips his head in the middle of a gait or transition, unless he wants to RUN through a fence and I have to half halt. Even then its a sideways head toss and not a half rear type deal. In his dressage bit he isn't bad, he just literally flips his head every transition, or mostly I notice in the trot.

I think B hates his dressage bit.

Before we revisits saddle fit, I've ridden his dressage bit on the jump bridle, and also his dressage bridle with his jump saddle, the common denominator here is the frenchlink. LE SIGH.

Which sucks, because he also REALLY hates anything ELSE that isn't a french link. Like literally, good luck walking forward because he will be spending his time flying backwards trying to spit offending bit out.

Which poses an even greater problem for competition. HE LOVES his waterford. Waterfords are not dressage legal. WHY WHY WHY though?? They are such nice bits. Yankee goes in one for XC and he adores it. They are so mild and my boys prefer the several breaks in the mouthpiece.

So what am I to do? He obviously goes super nice in his waterford, and resists the frenchlink a bit. Anything else is out of the question.

Any advise would be helpful....

I thought I was done with bitting problems, ugh.

Anyways, besides that, he was great this weekend. I was absolutely destroyed from shoveling an actual half ton of sawdust into my barn for the boys (arriving next week!!) and stacking the expensive fucking hay I bought their precious selves, so riding was hard.

He was VERY excitable and really wanted to jump and my body was like, no.

I had fully intended on jacking the oxers up to 3'6 to get some height in, but I was too sore to really tolerate his constant pulling so we schooled *trying* to maintain a nice, huntery canter in between jumps. Tried.

He was actually a very good boy, but I simply didn't have the physical ability to really ride well and cut the ride short. I was pleased though still, even with a few minor wtf moments, he was lovely.


This week I am interviewing for a part time medical billing position so along with grad school, gym, and full time insurance job, in addition to picking up Yankee's companion horse this weekend and bringing him home....we will see if we ride much.

Also, stay tuned for a cool giveaway for my 600th post!!
Posted by Checkmark115 at 8:14 AM
Email ThisBlogThis!Share to TwitterShare to FacebookShare to Pinterest